All Jump How to Stop Car Battery Drains

How to Stop Car Battery Drains

How to Stop Car Battery Drains

There are plenty of energy-robbing devices on your car that are supposed to go to sleep when it's parked, and sometimes, not all of them go to sleep. Here's how to give them a tranquilizer. 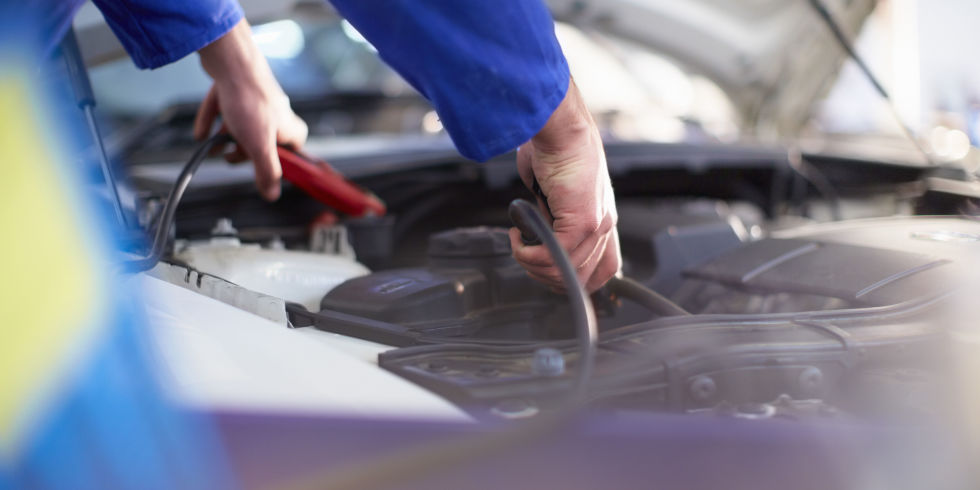 Your car won't start. The battery is so dead that the dome light barely makes enough illumination to help you find the key slot, not that turning the key generates anything more than a muted click underhood.

Usually, a dead battery wouldn't be that big of a deal, right? Except your car is parked in an airport parking lot, it's raining, and your cellphone is dead. It's going to be a long, wet walk back to a pay phone to call AAA for a jump.

All is fine—until the next morning when it's déjà vu. A quick boost from your battery charger gets your engine running, and a charging-system voltage test confirms that your alternator is charging. Further poking around doesn't uncover an obvious electrical issue. After charging the battery overnight, the car starts fine. But when left overnight without the charger, the car refuses to start. Conclusion: Something's draining the battery. You've got parasitic battery drain.

Most vehicles draw some battery current when the key is off, thanks to the clock and the internal memory of engine computers, body-control modules and radio presets. Altogether, they draw a very small amount of current. Fifty milliamps would be a safe upper limit for this, although many vehicles will draw less. If you're not sure, look up the correct rating in the service manual.

To measure the car-off current draw, you'll need a multimeter capable of reading current, preferably one with a 10- or 20-amp capacity, but a 200 milliamp lower scale. You can find these for as little as 20 bucks. Start with a fully charged battery. Either make sure the doors are closed or wedge the door switch shut. Turning off the dome light isn't good enough—on many cars, an open door will activate several circuits. (One example: Open the driver's door on some vehicles and the fuel-pump relay briefly activates, to prime the fuel injection for faster starting. After the initial surge, that circuit will continue to draw over 100 milliamps.) Unplug any power-draining cables from the lighter socket, such as a cellphone charger or GPS. Even if the device itself is unplugged from the charger, the plug may still consume a few milliamps of current. Got an ear-bleedin' stereo amp in the trunk? Pull the fuse, because it may be in standby mode rather than completely shut down.

One caution: If your radio or antitheft system requires you to input a code after the power is interrupted, better hunt it down now. It's likely that you'll need it. Don't let the dealer entice you to bring the car in and pay him to input it. The code should have been included with the owner's manual when you purchased the car.

Start hunting by putting your ammeter in series with the battery's ground circuit. (It's safer to meter the ground because if you use the positive side, it's easy to short the jumpers to ground, which makes sparks and burns up wires. Short the ground to ground and nothing happens.)

Disconnect the battery's ground cable and wire the ammeter in series between the battery terminal and the cable. Start with the meter on the highest range, probably 10 or 20 amps. Warning! Doing something silly, like trying to start the car or turn on the headlights—anything that draws more than the meter's rated capacity—can blow the meter's fuse. Once you have determined that the current drain you're reading is safe, gradually reduce the meter's scale to the appropriate low range, probably 2 amps or 200 mA. You are now reading the parasitic drain on the battery. Some vehicles will show as little as 10 mA residual drain. Others, probably high-end cars with lots of high-end gadgets, will draw more. An important note: Some devices, like alarms and automatic-dimming lights, will draw substantial amounts up to 20 minutes after they're deactivated. So if the reading is high, wait a few minutes to see if it changes.

You've determined you have excessive current draw from the battery. Now you have to figure out where. If it's not obvious, like the trunk light not going off, you have to get methodical. You can throw caution to the wind and start pulling fuses one at a time, until you see the excess drain drop off. Just be careful to get them back into the right socket.

Once you've determined the high-draw circuit, there still may be a half-dozen loads, each individually innocuous but collectively sucking the lifeblood out of your battery.

To zero in on that circuit or circuits, first reconnect the battery ground, taking care to maintain continuity through the jumpers until the clamp is making good contact. Then remove the offending fuse and use the leads of the multimeter to jumper the fuse terminals. I've got a set of dummy fuses—all three sizes of blade-style and the old-fashioned glass ones—with attached leads that make this part simple. Next, with the help of the schematic diagram, disconnect each device on the circuit—one at a time—and check the meter. When the milliamp reading drops precipitously, you've found the problem. It could be anything, but in my experience, the following are the most common. 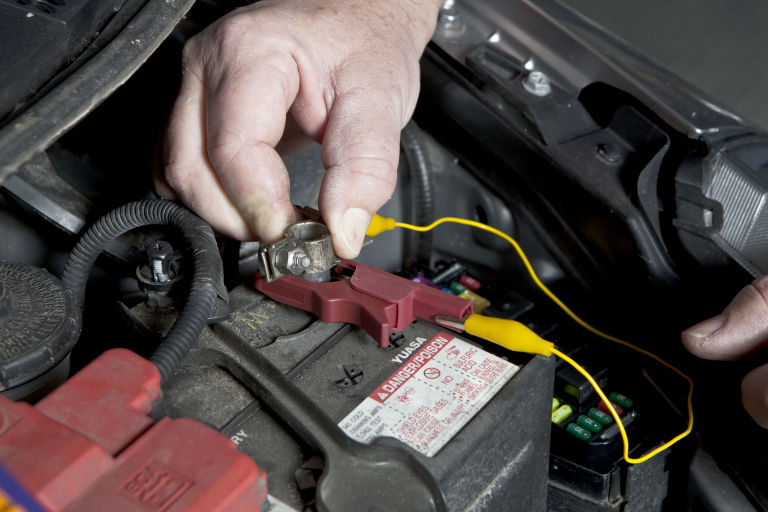 Start with a fully charged battery. Be sure the radio and lights are shut off. Unplug your cellphone charger, GPS or laptop. Close the door or hold the domelight button down with a wedge. Remove the key from the ignition. Now use a jumper to bridge the battery's negative post to the clamp to preserve any memory and to keep from activating the antitheft code if your radio uses one. 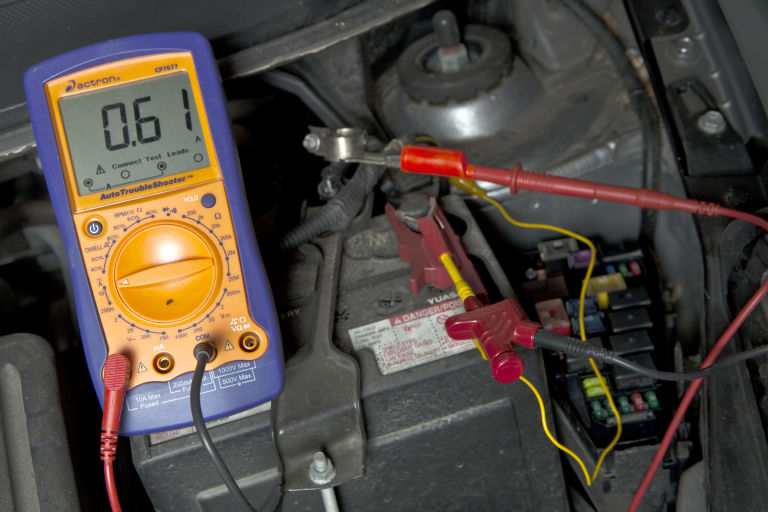 Now you can put your ammeter in series with the post and clamp. When you remove your first jumper, the meter will read the current draw from the battery. Here, 610 milliamps is way too much for comfort. 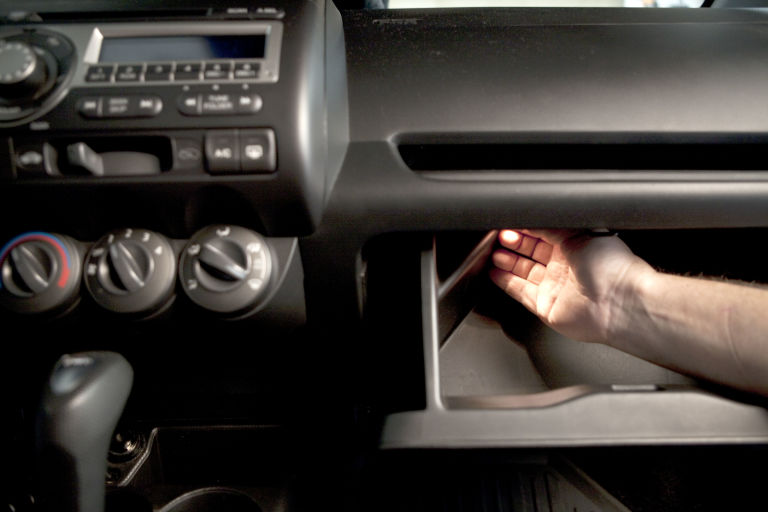 Got a light in the glovebox? Maybe it's not turning off. Pop open the door and see if the bulb is hot, but don't burn your fingers. Perhaps the trunk light stays lit. You might need to get into the trunk and have someone you trust close you in to see if it's going out. Or just touch the bulb to see if it's hot. (The first way is more fun.) 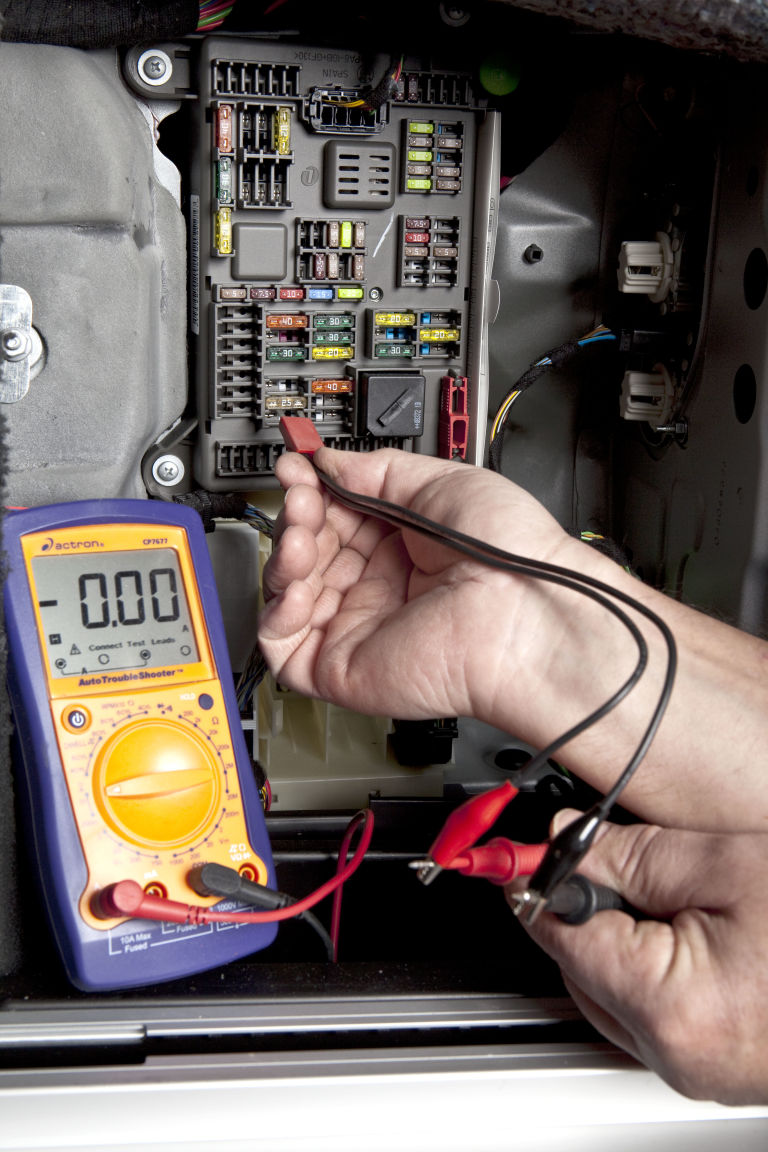 Once we narrowed the parasitic drain down to a single circuit, we used this test cable, which plugs in to the fuse box (rahamtool.com) to patch our ammeter in to the circuit. Disconnect, remove or turn off all the loads on the circuit one at a time until you identify the culprit

Aftermarket alarms are notorious for sucking even healthy, fully charged batteries dry within a few days. If you have any non-factory alarms, it's the first thing you should check. Be aware that there may be more than one connection to the car's electrical system, and some aftermarket installers may use, ahem, non-industry standard splicing techniques. So you may have to simply follow the alarm wires to see where they go. More expensive alarms tend to be less problematic, but maybe that's because more expensive alarms are installed by better, higher-paid technicians.

OEM stereos are usually not problematic. Aftermarket stereos, the kind with giant, finned boxes and their own finger-thick wires directly wired to the battery, can be. With a power lead bypassing the car's electrical system, they go into standby mode, waiting for the main radio head unit to tell them to wake up. In standby, they'll draw only a milliamp or three. If they fail to go into standby, or if the DIP switches on the amp are set incorrectly, they can draw as much as several hundred milliamps, even though they're not producing any actual noise. Or music.

Lots of new cars are available with proximity keys. They're a great convenience—all you need to do is walk up to your locked car with the key in your pocket or purse. As you approach the door, the locks pop open automatically. Plunk yourself in the seat and, with the key still in your pocket, thumb the starter button and drive away.

Guess how these things work. There's a radio receiver that continuously listens for the key's frequency. When the receiver hears a signal at its assigned frequency, it wakes up to see if the key is the one that matches the car. That draws more current for a minute or two, until the receiver abandons the possibility that it's about to unlock the door for master. This might be an issue if you leave the car parked for many weeks without starting it. Imagine the confusion of a car parked near the elevator door in a busy parking structure. Every proximity key that walks past makes it sit up and beg, draining your battery for a few minutes. Soon, dead battery.

This issue is even more profound in the case of hybrids like the Toyota Prius. The key receiver operates on 12 volts, as do most of the accessories. More importantly, the 12-volt battery operates the main computer that controls everything else, like the door locks. The Prius starter, however, operates off the 280-volt traction battery—but the main computer has to be powered up for anything to happen. Since it doesn't have to start the engine, the 12-volt battery of the Prius is very small, 38 ampere-hours. So while a 64-ampere-hour battery in a normal car can last for weeks of a proximity receiver checking for the right key, the Prius battery can run too low within a few days. Bottom line: Turn off the proximity-key function, from the Prius's electronic dashboard, whenever you're parking it longer than overnight. It might be possible to do this on other vehicles as well. Check the owner's manual.